This year’s NCAA Men’s Basketball Tournament had plenty of “madness,” with 10 teams advancing in upsets in the first round, followed by six more upsets in round two and another four upsets in the Sweet 16. The Cinderella story went to the Saint Peter’s University Peacocks, who made history as the first No. 15 seed to reach the Elite Eight—or quarterfinal—of the tournament.

No team ranked No. 13 or No. 14 has ever reached the Elite Eight, and just two teams ranked No. 12 have ever reached this prestigious quarterfinal. These rare moments in sports are special because they are so unusual. They capture our attention, and we fixate on the outcome, hoping to see the probabilistic “impossible” become a reality.

While it may not elicit the same excitement as watching a close basketball game, many in the financial industry are paying attention to another potential looming “upset”—the prospect of short-term yields reaching higher levels than long-term yields—otherwise known as a yield curve inversion. A yield curve is a collection of interest rates for debts of various maturities. 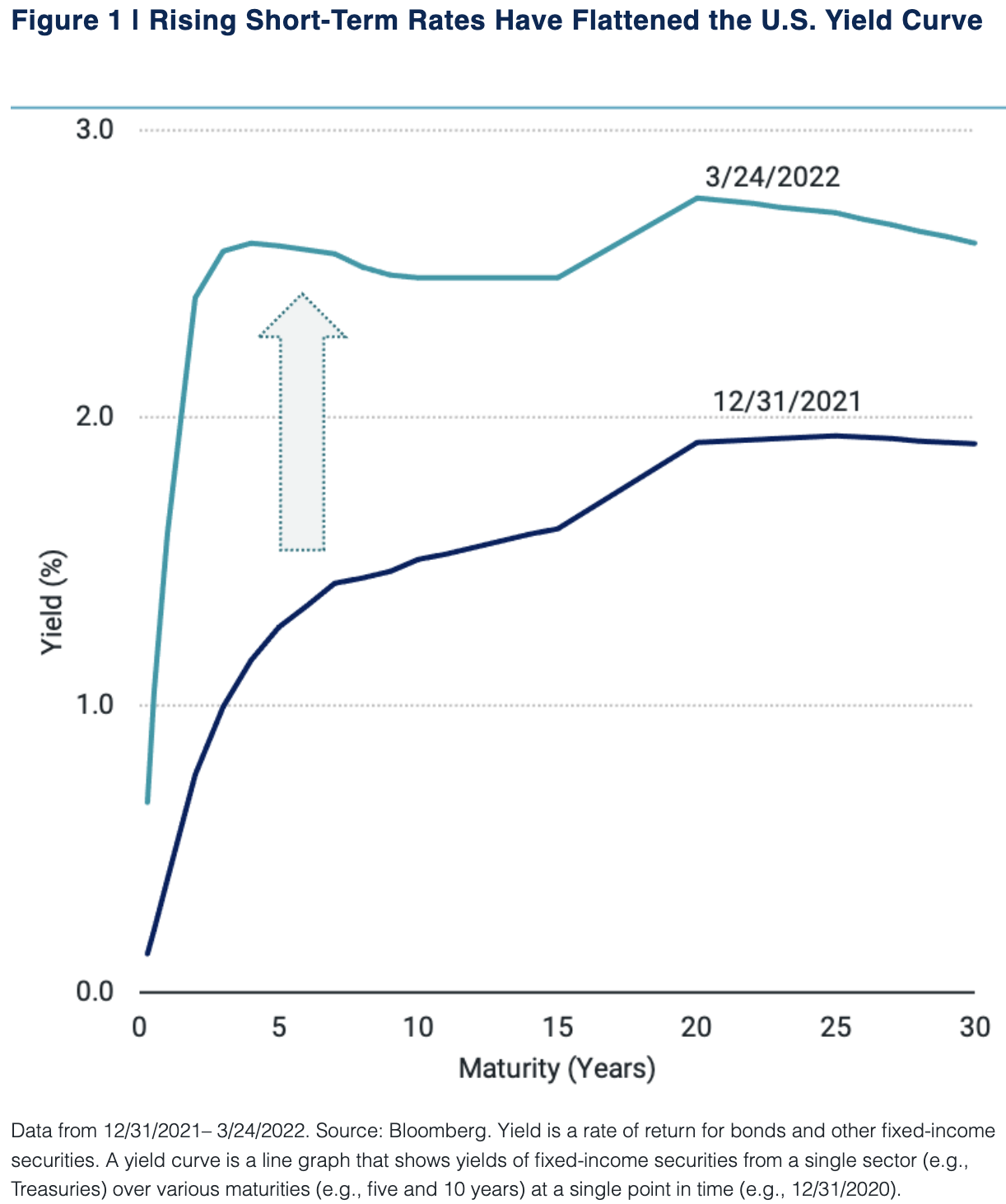 Why do investors pay such close attention to this measure? Yield curves generally slope upward, as the cost to borrow money/interest rate to lend money tends to be higher for the longer the duration of the debt—i.e., lenders demand more for taking on additional uncertainty. When short-term rates approach or overtake long-term rates, potential concerns may include:

Besides the theory, there is also past experience. Figure 2 shows the spread between the 10-year and one-year Treasury since October 1973. Inversions, or when the one-year was higher than the 10-year, are depicted in red. U.S. recessions are highlighted in gray. As Figure 2 shows, we can see that many recent yield curve inversions preceded a recession. 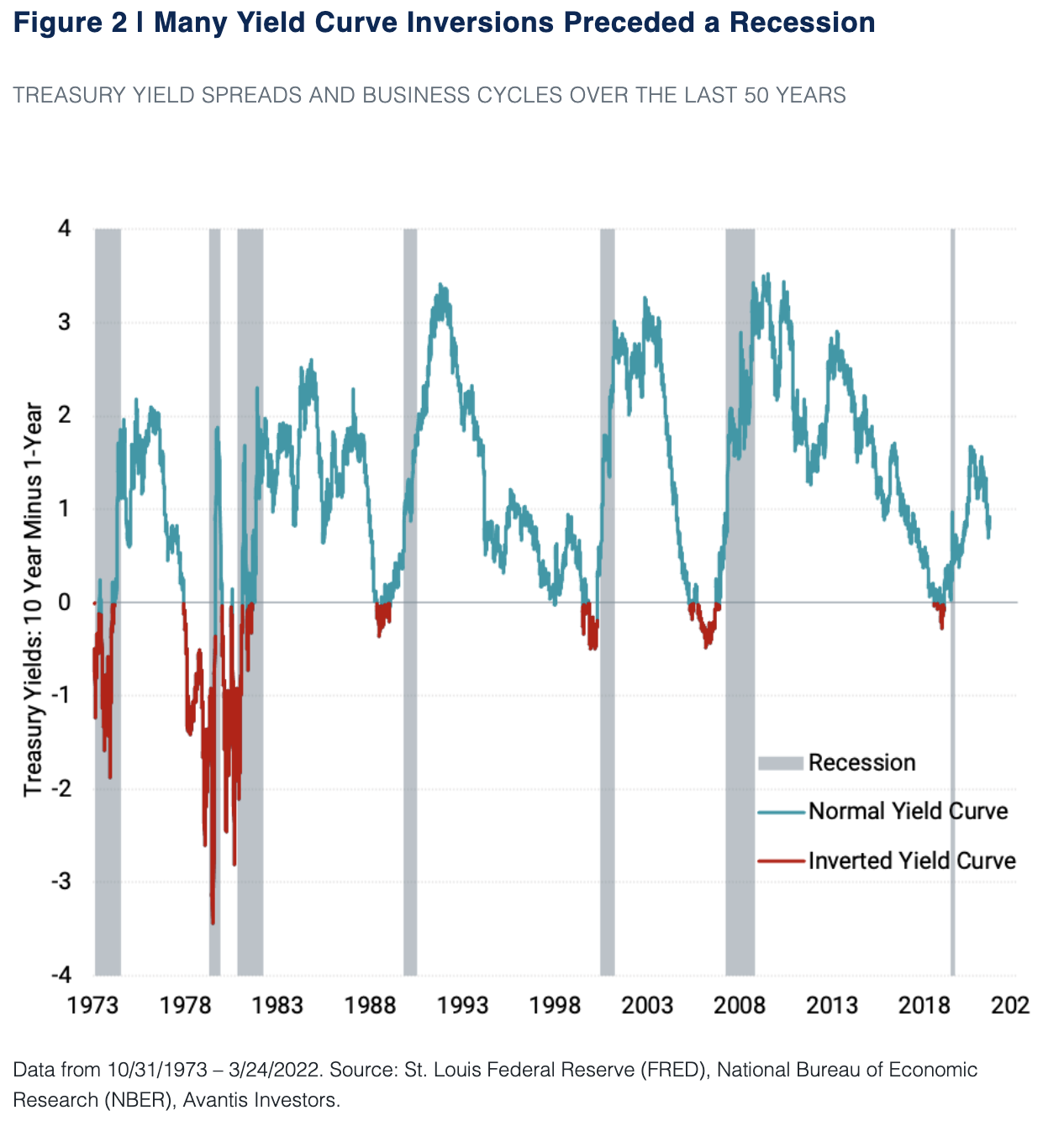 Given the theory and this past experience, it is understandable that some may see a possible yield curve inversion as a quasi-alarm bell starting to chime. But we would discourage investors from drawing too firm a conclusion from a flattening yield curve.

For one thing, while spreads like the 10-year minus three-month Treasury have recently been good “predictors” of a recession since the 1970s, if we extend our sample further back in time, we can note recessions (1957- 1958, 1960-1961) where the curve did not invert, not to mention an inversion in 1966 where a recession did not occur soon after that.

As you may have often heard from economists, there is a stark difference between correlation and causation. In more plain language, just because things have happened close to one another in the past does not necessarily mean that one caused the other.

For those who may not be satisfied by the correlation/causation argument, we ran an experiment to see if there was any strong relationship between current yield spreads and subsequent stock returns. The following two figures display results for one shorter-term timeframe and one longer-term timeframe in different forms. There is no reason why we chose one form over the other for each period. We included the different formats as some readers may find one easier to interpret than the other.

Figure 3 is a scatterplot comparing daily yield spreads between 10-year and one-year Treasuries versus the U.S. stock market return over the next six months. Each dot represents a day.

Yield curve inversions are on the left side of the chart when the number along the horizontal (x-axis) is negative. 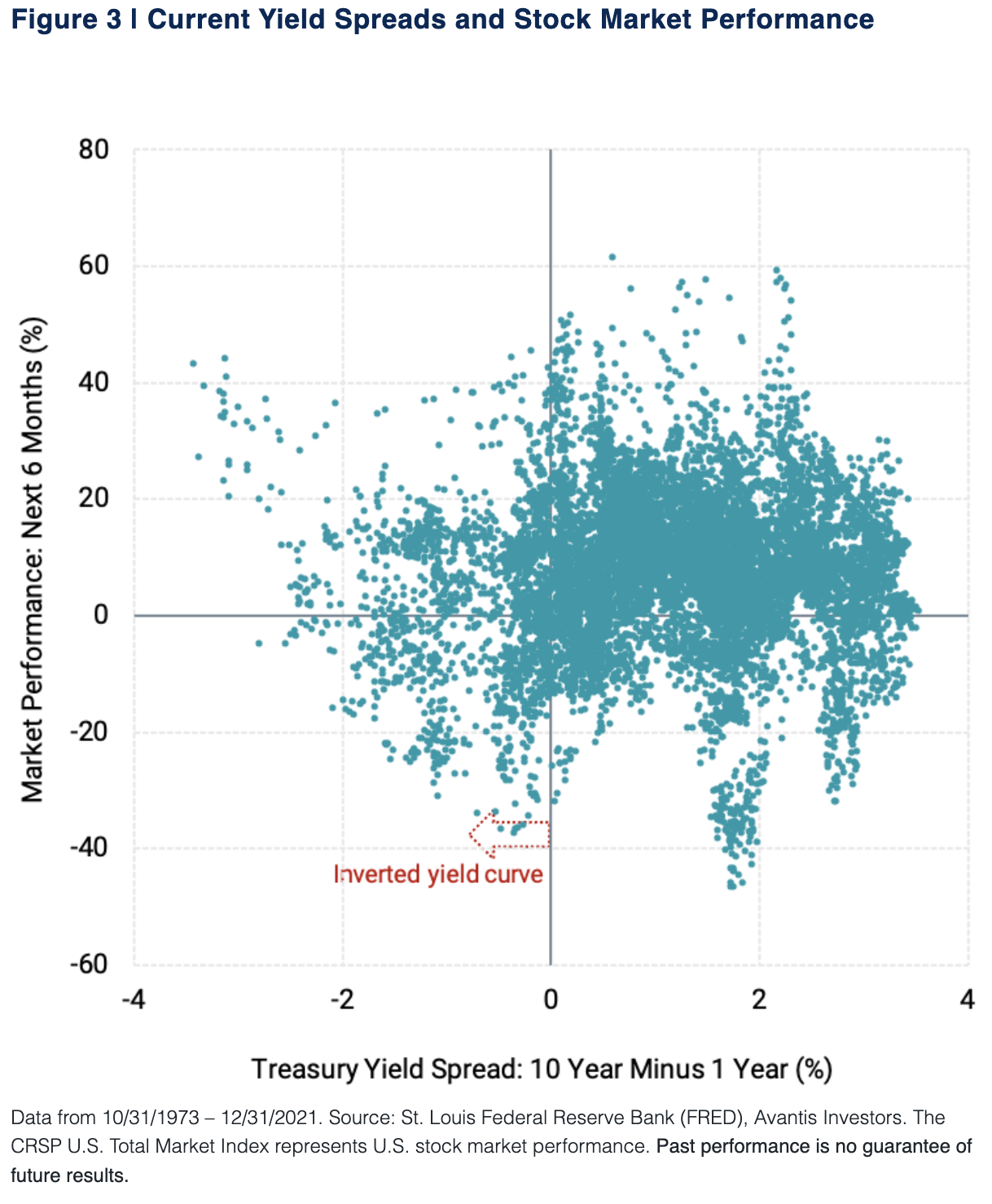 In Figure 4, we plot two lines. We have taken all the daily dots from Figure 3 and arranged them chronologically. The teal blue line shows the current yield spread over time and is red when the yield curve is inverted (left-hand axis). The gray line shows the subsequent three-year U.S. stock market return (right-hand axis). Once again, we observe a lot of noise. There are many periods where subsequent three-year returns are positive and several where returns are negative. We don’t see a strong relationship between these two variables over our sample period. 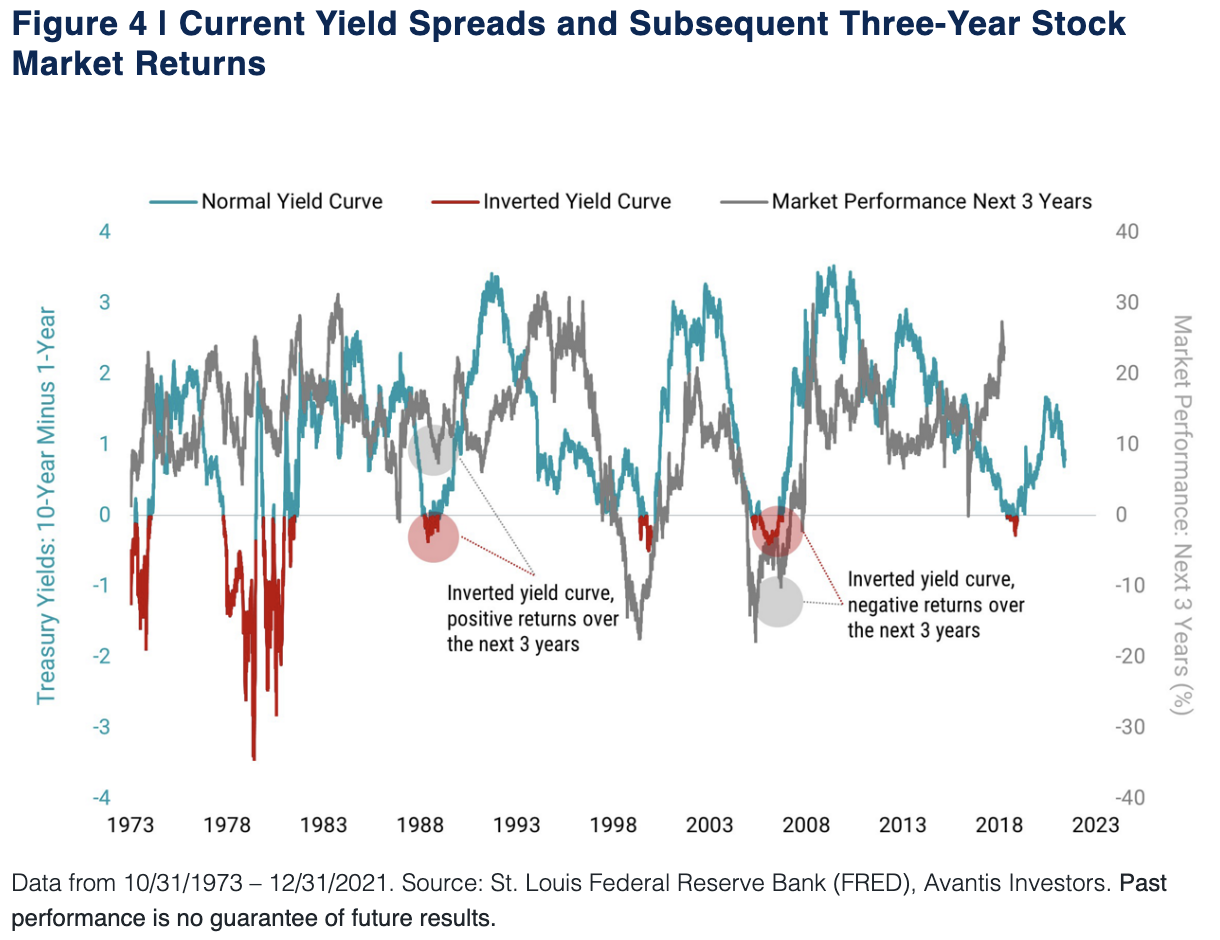 Be Wary of False Alarms

Does an inverted yield curve have economic implications? Perhaps. Should news of a possible yield curve inversion lead you to sell out of stocks? Probably not. Economists and practitioners use countless signals to make predictions about the future.

Former Federal Reserve Chair Alan Greenspan looked to the Men’s Underwear Index and decreasing sales as a sign of economic trouble. While there can be logical theories for how or why such signals provide us with certain information, as investors, we are likely better off remembering there is far more that is uncertain.

Uncertainty is something we must face, and while not always comfortable, we believe the ability to stay in your seat and remain invested provides the best chance for good results over the long term. Figure 5, which overlays the growth of $1 in the U.S. stock market onto Figure 1, shows that there have been market runs and drops in normal and inverted yield curves. Once again this demonstrates how investors willing to stick with stocks over the long haul have historically been rewarded. 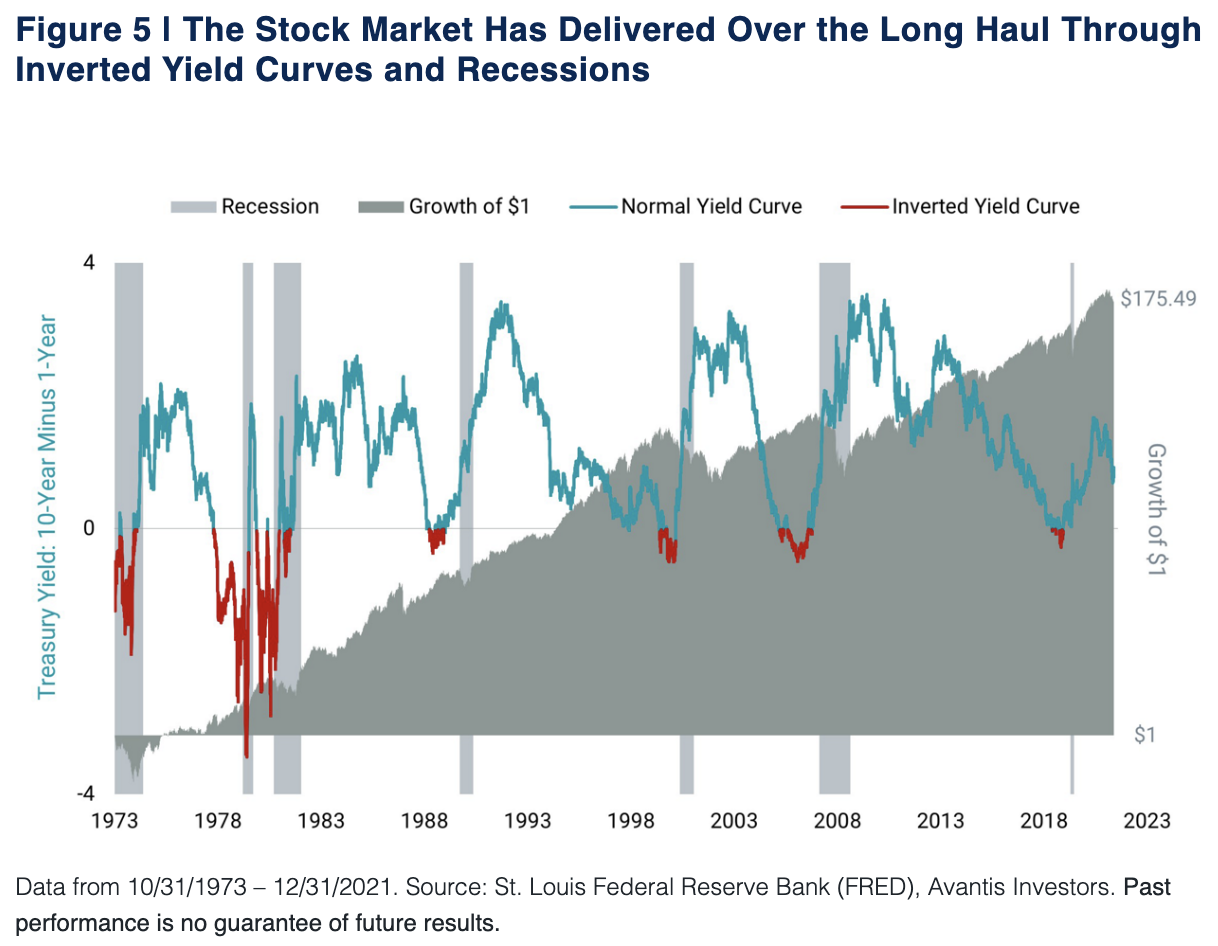 The Certified Private Wealth Advisor® (CPWA) certification administered by the Investments & Wealth Institute® is the standard for competence in the field of wealth management today. The advanced credential created specifically for wealth managers working with high-net-worth clients is focused on the life cycle of wealth—accumulation, preservation, and distribution.  CPWA certified professionals are able to identify and analyze the unique challenges high-net-worth individuals face and understand how to develop specific strategies to minimize taxes, monetize and protect assets, maximize growth, and transfer wealth.  The CPWA designation signifies that an individual has met initial and on-going experience, ethical, education, and examination requirements for the professional designation, which is centered on private wealth management topics and strategies.

This material and any opinions contained are derived from sources believed to be reliable, but its accuracy and the opinions based thereon are not guaranteed. The content of this publication is for general information only and is not intended to serve as specific financial, accounting or tax advice.  The opinions expressed and material provided are for general information, and should not be considered a solicitation for the purchase or sale of any security. Please consult legal or tax professionals for specific information regarding your individual situation.

This material has been prepared for educational purposes only. It is not intended to provide, and should not be relied upon for, investment, accounting, legal or tax advice.

Investment return and principal value of security investments will fluctuate. The value at the time of redemption may be more or less than the original cost. Past performance is no guarantee of future results.

Diversification does not assure a profit nor does it protect against loss of principal.

It is not possible to invest directly in an index.