Passive investing has been ridiculed by Wall Street for decades. The reason is obvious. As American novelist Upton Sinclair wrote, “It is difficult to get a man to understand something when his salary depends on his not understanding it.”

The tidal wave that is the trend toward indexing—and passive investing in general—certainly has created what we could describe as an existential threat to the active management industry. That may explain why Wall Street has always railed against it.

As director of research for The BAM Alliance, I am often asked by clients to comment on papers and articles extolling the benefits of active management and knocking passive management.

The articles are typically filled with statements that, at first blush, might appear to make sense, and they might even have a grain of truth attached to them; however, a deeper diver frequently exposes the “untruths.”

Most recently, I was asked to comment on an article titled “What They Don’t Tell You About Passive Investing.” It was produced by Morgan Stanley, and the thrust of the paper is that “the exodus from active to passive funds may be reaching bubble-like proportions, driven by an exaggerated critique of active management.” The author goes on to make various claims, of which we can examine the veracity.

For example, the paper states: “In the United States, historically, many active managers have tended to outperform in bear markets, but underperform in bull markets.” Certainly, that is true. But to me, it’s like a magician who is attempting to distract.

To begin, a fund or manager can underperform in bull markets and outperform in bear markets simply by owning low-beta/low-volatility stocks. And you don’t need active managers to do that for you. You also don’t need to pay their expensive fees.

For instance, you could invest in the iShares Edge MSCI Min Vol USA ETF (USMV), which has an expense ratio of just 0.15%. Investing in quality stocks can help achieve similar outcomes in both underperformance in bull markets and outperformance in bear markets. And you can use the iShares Edge MSCI USA Quality Factor ETF (QUAL) for that. It, too, has an expense ratio of just 0.15%.

In other words, if active managers outperformed in bear markets and underperformed in bull markets, that outcome likely was a result of their exposure to factors such as quality and low volatility, not any special skill they have as active managers.

For example, a study written up in the Spring/Summer 2009 issue of Vanguard Investment Perspectives defined a bear market as a loss of at least 10%, and examined the period 1970 through 2008.

The period included seven bear markets in the U.S. and six in Europe. Once adjusting for risk (exposure to different asset classes), Vanguard concluded that “whether an active manager is operating in a bear market, a bull market that precedes or follows it, or across longer-term market cycles, the combination of cost, security selection, and market-timing proves a difficult hurdle to overcome.”

The study’s authors “also confirmed that past success in overcoming this hurdle does not ensure future success.” Vanguard reached this conclusion despite the fact that the data contained survivorship bias, which favored active managers. Sleight of hand might work for magicians, but it doesn’t hold up to the cold, hard facts.

Here’s another interesting insight. One could make a plausible claim that indexing got its first big boost in the summer of 1975, when New York Telephone engaged American National Bank of Chicago to run a portion of its pension fund in an S&P 500 strategy—one of the first major plan sponsors to do so.

The date was no accident. It closely followed the devastating bear market of 1973-74, and the pension executives in this case were keenly aware that the active managers who had claimed their strategies would protect assets from market downturns struggled to explain why they had done even worse than a comparable index strategy.

The Morgan Stanley paper then went on to claim that, while in the U.S. active management had not fared so well in recent years, it had outperformed by wide margins in international developed and emerging markets. Let’s look to the latest SPIVA report on the performance of active managers, the mid-year 2017 scorecard. Here’s what the report found:

We can also compare the performance of international developed and emerging market active managers to the performance of index funds from Vanguard and passively managed structured portfolios from Dimensional Fund Advisors (DFA). (Full disclosure: My firm, Buckingham Strategic Wealth, recommends DFA funds in constructing client portfolios.) The following table shows the 15-year Morningstar performance rankings of their funds for the period ending 2016. 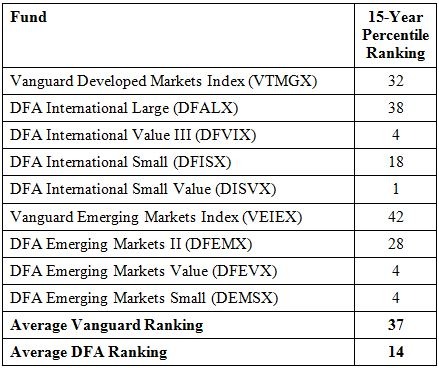 Especially note the high rankings of DFA funds in the very class Morgan Stanley cites as the most inefficient, emerging markets. How can you have two of DFA’s passively managed emerging market funds ranked in the 4th percentile, outperforming even before taxes 96% of active funds, if the markets are inefficient and active managers are so successful?

Let’s go a bit deeper into exposing the sleight-of-hand papers promoting active management often use. One way is to not use the right benchmarks, creating easy-to-beat ones. The Morgan Stanley paper claims that, over the past 15 years, active managers outperformed the MSCI All Country World Index ex-U.S. by 107 basis points and the MSCI Emerging Markets Index by 76 basis points. So, how does that square with the data from the SPIVA reports and Morningstar?

In other words, small and small value stocks dramatically outperformed. Thus, to outperform the MSCI All Country World Index ex-U.S., all an active manager had to do was own small and value stocks.

As the preceding table shows, Vanguard and DFA’s passive funds outperformed a large majority of active funds. To emphasize this point, as of Nov. 9, 2017, DISVX had a ranking of 1. Yes, the passively managed DISVX outperformed virtually all actively managed funds in that Morningstar category, something many active managers generally won’t tell you.

Fact-based evidence, such as that presented above, has caused the massive transfer of assets from active to passive strategies—not a bubble caused by irrational investor behavior as alluded to by Morgan Stanley. Active managers need you to believe that theirs is the winning strategy because it’s the winning strategy for them—not you—as they get to extract high fees for the high likelihood of persistent underperformance.

Why? Nobel Prize-winner William Sharpe provided this simple and elegant explanation in his paper “The Arithmetic of Active Management”: “Properly measured, the average actively managed dollar must underperform the average passively managed dollar, net of costs. Empirical analyses that appear to refute this principle are guilty of improper measurement.”

As Sharpe explains in his paper, passive funds earn the returns of their asset class less low costs, and because all stocks must be owned by someone, active managers collectively must also earn the same gross return of the asset class, but they do so while incurring higher expenses. As the Vanguard study showed, in bull markets or bear markets, active managers underperformed. Period.

As a final note, I would add that because there are negatives to pure indexing that can be minimized or avoided, and benefits that can be improved on and maximized, my firm prefers passively managed (defined as no individual stock selection or market timing), structured portfolios.

We believe their superior structure and patient trading strategies allow them to capture greater exposure to the factors to which we want exposure (such as size, value, momentum, quality, profitability) in the most efficient manner.

Larry Swedroe is the Director of Research for The BAM Alliance.

The opinions expressed by featured authors are their own and may not accurately reflect those of Beacon Hill Private Wealth and the BAM ALLIANCE. This article is for general information only and is not intended to serve as specific financial, accounting or tax advice.