While I could provide an almost endless list of forecasts that went wrong from so-called experts, among the most infamous was surely Meredith Whitney’s December 2010 forecast of between 50 and 100 “significant” municipal bond defaults, totaling “hundreds of billions of dollars.” In March 2011, noted economist Noriel Roubini jumped on Ms. Whitney’s bandwagon, predicting $100 billion in defaults over the next five years. Such forecasts led to massive withdrawals from municipal bond mutual funds.

The massive scale of problems that Whitney and Roubini anticipated didn’t occur because many (though far from all) governments took actions to address the problem, cutting spending and raising revenues.

However, investing in municipal bonds is riskier than many investors may perceive, with last year’s $74 billion default by Puerto Rico providing a reminder. There have been other significant ones in recent years, including Jefferson County, Alabama ($4 billion); Stockton, San Bernardino and Vallejo, California; Harrisburg (the capital of Pennsylvania); Central Falls, Rhode Island; and Detroit ($18 billion).

Unfortunately, municipal bond investing is getting riskier as the financial conditions of a significant number of states and cities have deteriorated. And while defaults are still relatively rare, municipalities are defaulting at an increasing rate. According to U.S. News & World Report, almost 44% of the defaults Moody's Investor Service recorded between 1970 and 2016 occurred since 2007.

As the number of bankruptcy filings increased, the “taboo” against bankruptcy has likely weakened—rather than cut services, distressed governments might default, especially since pension benefits are difficult to cut (and may, in some cases, be constitutionally protected by state law).

Investors need to be careful to not only look at a government’s funding ratio on its pension obligations (as reported by Standard & Poor’s) but also the adjusted net pension liabilities (ANPL) as a percent of revenue (as reported by Moody’s), which is a truer reflection of its financial situation, because it is based on more realistic forecasts of returns. Unfortunately, states can set their own rate of return assumptions.

In their October 2018 report, “U.S. State Pensions Struggle For Gains Amid Market Shifts And Demographic Headwinds,” Standard and Poor’s reported that the rate of return assumptions across state public pension plans averaged 7.3% for fiscal 2019. Given historically high U.S. equity valuations (forecasting lower future returns), and with bond yields still well below their historical averages, it’s not prudent to rely on a return assumption that high. That’s why Moody’s uses its own assumptions based on current valuations.

The bottom line is that risks to municipal bond investors is increasing. That means it is becoming more important to focus on credit quality. And because the main role of fixed income in a portfolio should be to dampen the risk of the overall portfolio, investors should limit their investments in municipal bonds to only bonds that are rated AAA or AA (rated A for maturities of under three years).

In addition, regardless of the rating, investments should be in only the two safest types of bonds: general obligation bonds (GOs) and essential service revenue bonds (such as water and sewer). The table below shows why this should be the case. It is from a Moody’s studycovering the period 1970 through 2016. 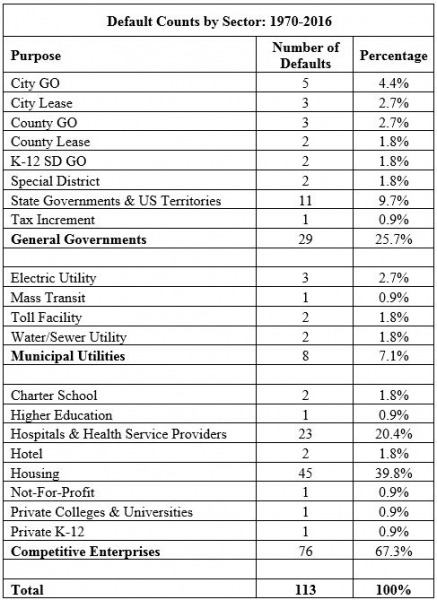 The financial situation of several states has deteriorated to such a degree that you should avoid investing in any bonds from those states, even if the issuer itself is other than the state and is highly rated.

One reason is that municipalities are not isolated from the state’s financial condition, as states often provide a portion of their revenues. The second is that, for some states, the data presents a dismal picture, one with the potential for “vicious cycle” outcomes with higher tax rates leading to outmigration—especially of wealthier people and businesses that pay most of the taxes—and lower property values.

Connecticut is a good example, as the state was dead last in the nation for personal income growth since 2007. Personal income in Connecticut grew only 0.6% per year since just before the 2008 recession, versus the national average of 1.6%, and it was one of only five states that saw personal income decline over the past two years.

Because of their low funding ratios and high ANPL to revenue ratios, when building individual bond portfolios for our clients, my firm does not buy bonds from Illinois, Kentucky, Connecticut, Louisiana, Alaska, New Jersey and Pennsylvania. (While we won’t buy the states’ GOs, we will buy other highly rated bonds from other issuers within the state.)

Illinois’ situation is so bad that its funded pension ratio is just 38% and its ANPL is almost 16 times that figure—almost twice as bad as any other state’s! Kentucky (34%) and New Jersey (36%) have funding ratios that are actually worse than Illinois, but their ANPLs are “only” about 10 times and 8 times their funding ratios, respectively.

In summary, given that the primary role that bonds should play in a portfolio is one of safety, seeking higher returns from riskier municipal bonds is a “Pascal’s Wager”—the consequences of being wrong far outweigh the benefits of being right.

As someone interested in buying municipal bonds, safety is and should be your paramount concern. It will help you to know the history of defaults. The Moody’s report looked at every single default on municipal bonds it rated from 1970 through 2016. Out of thousands of bond issues rated by Moody’s over this time period, there were a total of 113 bond defaults.

Of the 113 defaults, just 10 were on general obligation debt. The vast majority of the bond defaults (68) occurred in the health care and housing sectors. When issuers such as hospitals and housing projects default on bonds, the amount recovered also tends to be much lower than for general obligation bonds. This gives us an easy rule to work with: Avoid hospital/health-care-related bonds and multifamily housing projects. Because there are more than 80,000 issuers, eliminating a few problem categories of issuers from your investing consideration will not limit your choice in any material way.

One last note of caution: Of the 113 municipal bond defaults, 42 occurred in just the last five years of the period, an average of more than eight per year. That is up from an average of less than two per year in the prior 42 years. Risks, it appears, are increasing.