However, other issues worrying investors also likely contributed to the index’s steep drop: fears of a trade war given that hardliner Robert Lighthizer will lead negotiations with China instead of Steven Mnuchin; the potential for rising interest rates to slow auto and home sales; uncertainty about tax and regulatory policy with Democrats retaking the U.S. House; and even geopolitical risks related to Russian aggression in Ukraine.

All these issues, along with still relatively high U.S. equity valuations (the CAPE 10 remains at about 30), and perhaps warnings by Goldman Sachs that cash would be king, might have played a role in the debacle. That said, let’s focus on the issue of the inverted yield curve.

Investors have been worried about the potential for an inverted yield curve for a long time, as the spreads between longer- and shorter-date securities have been narrowing for most of the past few years, and inverted curves have predicted all nine U.S. recessions since 1955. A July 2018 article I wrote on this subject reproduced the following chart, courtesy of WealthManagement.com, which shows the yield spread between two-year Treasury notes and 10-year Treasury notes during the most recent recessions (shaded in gray). 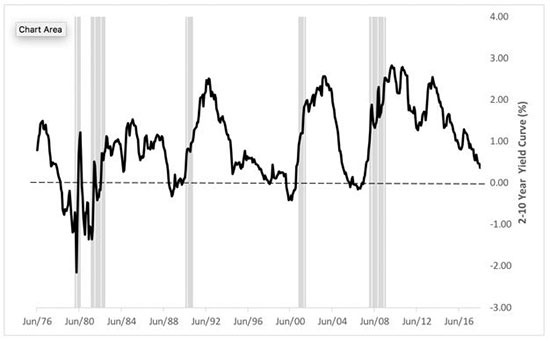 (For a larger view, click on the image above)

Recent history shows that a recession follows yield curve inversion in an average of 16 months, and the setback lasts, peak to trough, for an average of 12 months. My aforementioned July 2018 article discussed why I thought investors generally should not act on what appears to be important information.

I thought I would reinforce that message by providing the historical evidence on equity returns following yield curve inversions, which essentially is that there has not been a strong link between these inversion periods and stock market returns.

In an August 2018 article, “What Does a Yield Curve Inversion Mean for Investors?”, Dimensional Fund Advisors examined the returns to stocks following inversions for five major developed nations, including the U.S., since 1985. The article states: “Equity returns (as measured by MSCI local currency indices) were a mixed bag in the three years following an inversion, with US index returns higher 66% of the time at the 12-month mark and only 33% of the time 36 months later. When all countries are included, returns of the indices were higher 86% of the time 12 months later and 71% of the time 36 months later.”

Dimensional concluded: “It is difficult to predict the timing and direction of equity market moves following a yield curve inversion.”

In other words, U.S. stock market returns have tended to be lower than their historical average, but still positive, following periods of yield curve inversion.

The bottom line is that, while an inverted curve may be a reliable indictor that a recession is likely to begin, on average, within 16 months, it is not an indicator reliable enough to allow you to profitably time stock markets.

That should not come as a surprise, as there is no evidence that active managers have been able to exploit any signal provided by well-publicized information on the predictive nature of yield curve inversions.

If there were any evidence, we would see it in the annual S&P Dow Jones Indices versus Active (SPIVA) scorecards. But none exists, in either the stock or bond market.

Remember, if information is well known, any predictive value it contains is already built into current prices. Thus, it’s unlikely you can use it to generate outperformance. Investors fail to differentiate between information and value-relevant information, trading on what is nothing more than information that has no value. Certainly, if you hear it on the TV or read it in the newspaper, it is far too late to act on.

Summarizing, the strategy most likely to allow you to achieve your financial goals is to develop and adhere to a long-term plan in line with your ability, willingness and need to take risk. By doing so, you will be better able to look past the noise of the market and focus on investing in a systematic way that will help you meet long-term goals.