At the start of each year, I compile a list of predictions that gurus have made for the upcoming year, along with some items I frequently hear from investors—sort of a consensus of “sure things.” I keep track of these sure things with a review at the end of each quarter.

Our first sure thing was that the Federal Reserve would continue to raise interest rates in 2017, leading many to recommend investors limit their bond holdings to the shortest maturities. Economist Jeremy Siegel at one point even warned bonds were “dangerous.”  On March 15, 2017, the fed raised interest rates by 0.25%. It did so again on June 14, 2017. However, despite the prediction of rising rates having actually occurred, through June 30, 2017, Vanguard’s Long-Term Bond Index Fund (VBLIX) returned 6.4%, outperforming its Short-Term Bond Index Fund (VBIRX), which returned 1.1%, and its Intermediate-Term Bond Index Fund (VBILX), which returned 2.9%. Score: -1.

The second sure thing was that, with the large amount of fiscal and monetary stimulus we have experienced, in addition to the anticipation of a large infrastructure spending program, the inflation rate would rise significantly. On June 14, 2017, the Bureau of Labor Statistics reported that the Consumer Price Index for All Urban Consumers dropped 0.1% in May on a seasonally adjusted basis. The agency also reported that the index for all items rose 1.9% over the last 12 months. The index for all items less food and energy had risen just 1.7% over the 12 months prior to that. Score: -1.

The third sure thing was that with the aforementioned stimulus, anticipated tax cuts and a reduction in regulatory burden, the growth rate of real GDP would accelerate, hitting 2.2% this year. On June 29, 2017, the Bureau of Economic Analysis reported that GDP grew just 1.4% in the first quarter. What’s more, a second-quarter survey of professional economists lowered its full-year forecasts slightly to 2.1%. We’ll call this one a draw at this point. Score: 0.

Our fourth sure thing follows from the first two. With the Fed tightening monetary policy and our economy improving—and with the economies of European and other developed nations still struggling to generate growth, and with their central banks still pursuing very easy monetary policies—the dollar would strengthen. The dollar index (DXY) ended 2016 at 102.38. The index closed the second quarter at 95.63. Score: -1.

The sixth sure thing was that, with the Shiller cyclically adjusted price-to-earnings (P/E) ratio at 27.7 as we entered the year (66% above its long-term average), domestic stocks are overvalued. Compounding the issue with valuations is that rising interest rates make bonds more competitive with stocks. Thus, U.S. stocks would be likely to have mediocre returns in 2017. A group of 15 Wall Street strategists expects the S&P 500, on average, to close the year at 2,356. That’s good for a total return of about 7%. As noted above, VFIAX already has returned 9.3% in just the first half of the year. Score: -1.

The seventh sure thing was that, given their relative valuations, U.S. small-cap stocks would underperform U.S. large-cap stocks this year. Morningstar data showed that at the end of 2016, the prospective P/E ratio of Vanguard’s Small Cap Index Fund Admiral Class (VSMAX) stood at 21.4 while VFIAX’s P/E ratio stood at 19.4. Through June 30, 2017, VSMAX returned 5.8%, underperforming VFIAX, which, as we stated, returned 9.3%. Score: +1.

The eighth sure thing was that, with the non-U.S. developed and emerging market economies generally growing at a slower pace than the U.S. economy (and with many emerging markets hurt by weak commodity prices, slower growth in China’s economy, the Fed tightening monetary policy and a rising dollar), international developed-market stocks would underperform U.S. stocks this year. Through June 30, 2017, Vanguard’s Developed Markets Index Fund Admiral Class (VTMGX) returned 14.7%, outperforming VFIAX. Score: -1.

Our final tally for the period shows that six “sure things” failed to occur, while just one actually happened. We also had one draw. I’ll report back again at the end of the third quarter. The following table shows the historical record since I began this series in 2010: 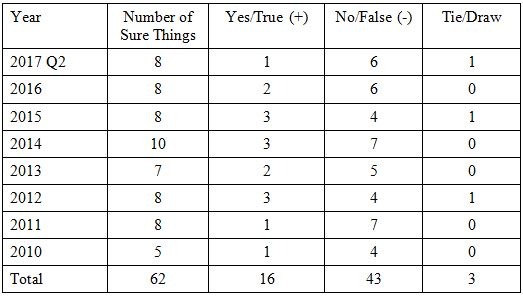 The table shows that only about 25% of sure things actually came to pass. Keep these results in mind the next time you hear some guru’s forecast.

The opinions expressed by featured authors are their own and may not accurately reflect those of the BAM ALLIANCE. This article is for general information only and is not intended to serve as specific financial, accounting or tax advice.