Thirty years ago, emerging markets made up only about 1% of world equity market capitalization, and just 18% of global GDP. As such, the ability to invest in emerging markets was limited—the few funds available were high-cost, actively managed funds.

Today the world looks very different. Emerging markets represent about 13% of global equity capitalization, and more than half of global GDP. In addition, the cost of obtaining exposure to emerging markets has decreased considerably. The expense ratio of Vanguard’s Emerging Markets Stock Index Fund Admiral Shares (VEMAX), for example, is just 0.14%.

Two Common Mistakes; Return
Yet despite emerging market stocks representing about one-eighth of global equity market capitalization, the vast majority of investors has much smaller allocations to them, dramatically underweighting the asset class. This underweighting often is a result of two mistakes.

The first, and most prominent, is the well-known home country bias, which causes investors all around the globe to confuse familiar investments with safe investments. Unfortunately, it cannot be that every developed country is safer than the others. Compounding the problem, investors tend to believe not only that their home country a safer place to invest, but also that it will produce higher returns, defying the basic financial concept that risk and expected return are related.

The second mistake is that investors are subject to recency bias—allowing more recent returns to dominate their decision-making. From 2008 through 2017, the S&P 500 Index returned 8.5% per year, providing a total return of 126%. During the same period, the MSCI Emerging Markets Index returned just 2.0% a year, providing a total return of 22%. It managed to underperform the S&P 500 Index by 6.5 percentage points per year, and posted a total return underperformance gap of 104 percentage points.

Not only were investors earning much lower returns from emerging market stocks, they also were experiencing much greater volatility. While the annual standard deviation of the S&P 500 Index was about 15% per year, the MSCI Emerging Markets Index’s standard deviation was about 23% per year. Not exactly a great combination—lower returns with more than 50% greater volatility. What’s to like?

The illustration below depicts the difference between “convex” and “concave” investing behavior. 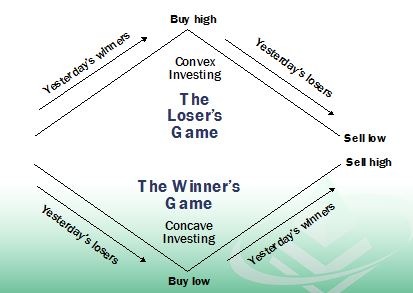 While investors know that buying high and selling low isn’t a good strategy, the research shows that individual investors tend to buy after periods of strong performance (when valuations are higher and expected returns are thus lower) and sell after periods of poor performance (when valuations are lower and expected returns are thus higher). Research has found this destructive behavior has led to investors underperforming the very funds in which they invest.

Furthermore, investors tend to have short memories. For example, it wasn’t long ago that investors were piling into emerging market equities due to their strong performance. For the five-year period 2003 through 2007, while the S&P 500 Index provided a total return of 83%, the MSCI Emerging Markets Index returned 391%. How quickly investors forget!

Roberto Violi and Enrico Camerini contribute to the literature on emerging markets with the study “Emerging Market Portfolio Strategies, Investment Performance, Transaction Cost and Liquidity Risk.” The goal of their study, which was originally written in August 2016 but published on SSRN in March 2018, was to explore the prominent drivers of risk and return in emerging markets. They noted that emerging markets (EM) have the attractive qualities of high average returns and low correlation with developed markets (DM).

However, global markets have become more integrated, and correlations have risen. In addition, as EM have grown and become more investable, with implementation costs having fallen, the risk premium should also have come down. The question is whether the current empirical evidence would still suggest there is a significant benefit to including EM assets in a globally diversified portfolio.

Following is a summary of their findings:

There are some other important points we need to cover.

Many investors have been attracted to the fact that EM have experienced, and are forecasted to continue to experience, higher rates of economic growth than DM. However, academic research shows very little evidence of correlation between the rate of economic growth and equity returns. In fact, if anything, the evidence suggests a slightly negative relationship.

The logic is simple in that markets incorporate those higher expected rates of economic growth into prices—markets price not growth, but risk. Thus, a higher rate of growth, if accompanied by higher valuations, isn’t necessarily a prescription for higher expected returns.

However, as Violi and Camerini point out, while EM continue to have higher expected rates of economic growth, they also have lower valuations and higher ROE. Thus, while they are riskier, investors are compensated for that higher risk in the form of higher expected returns.

Is Active Management The Winning Strategy?

With EM being considered by so many as inefficient (or less efficient), it should not be a surprise that a majority of funds providing exposure to these markets is managed actively. Long-term performance results for actively managed funds, however, reveal a different story about their supposed advantage in this space.

Even with the survivorship bias in the data (and at 15 years, it can be quite large), each of the three funds outperformed the vast majority of actively managed funds, as their respective rankings were in the 35th, ninth and third percentiles.

Highlighting the importance of survivorship bias is that the year-end 2017 SPIVA scorecard found that just 55% of active funds survived the full 15-year period it examined. If we adjust the Morningstar rankings on the three DFA funds to account for that degree of survivorship bias, their rankings improve to the 19th, fifth and second percentiles. And that’s on a pretax basis.

As Violi and Camerini explain: “The cost of trading is structurally higher in EM. In particular, comparing transaction costs in emerging markets to more developed markets, it turns out that total costs are 95% larger relative to all other markets and over double those observed in the US…. Much of this difference lies in implicit trading costs, where EM costs are over 1.5 times those of more developed markets, but explicit costs also are a factor, being 70% higher in the EM space.”

They found that, while the total costs of a passive strategy are about 50-60 basis points, the costs of active strategies are, on average, almost triple that, at about 1.7%. That’s a high hurdle to overcome in the effort to achieve alpha.

As noted, Violi and Camerini found that factor-based investment strategies have historically worked in EM. We can see this in live funds by examining the returns of the same three DFA funds. The longest period we have for the three begins May 1998. From May 1998 through February 2018, the MSCI Emerging Markets Index returned 8.1%, while DFA data show that DFEMX returned 8.8%, DFEVX returned 11.2% and DEMSX returned 11.8%.

While Violi and Camerini noted that global markets have become more integrated and, thus, the correlation between EM and DM have risen, EM are still not fully integrated into world capital markets. Therefore, emerging markets should still be viewed as a distinct asset class.

If the world market was fully integrated, we would not expect to see such dramatic differences. Clearly, there are still significant diversification benefits to be had.

The Case For Global Diversification

Diversification rightly has been called the only free lunch in investing. A portfolio of global equity markets should be expected to produce a superior risk-adjusted return to any one country or region held in isolation. However, the benefits of global diversification came under attack as a result of the financial crisis of 2008, when all risky assets suffered sharp price drops as their correlations rose toward 1.

When that happened, many investors surmised that global diversification doesn’t work because it fails when its benefits are needed most. That is wrong on two fronts. First, the most critical lesson investors should have learned is that, because correlations of risky assets tend to rise toward 1 during systemic global crises, their portfolios should be sufficiently allocated to the safest bond investments (investments such as U.S. Treasury bonds, FDIC-insured CDs and AAA/AA-rated municipal bonds). The overall portfolio should reflect one’s ability, willingness and need to take risk.

At the time they’re needed most (during systemic financial crises), the correlations of the safest bonds to stocks, which average about zero over the long term, tend to turn sharply negative. They benefit not only from flights to safety but from flights to liquidity.

The second lesson many investors failed to understand is that, while international diversification doesn’t necessarily work in the short term, it does work eventually. This point was the focus of a paper by Clifford Asness, Roni Israelov and John Liew, “International Diversification Works (Eventually),” which appeared in the May/June 2011 edition of the CFA Institute’s Financial Analysts Journal.

The authors explained that those who focus on the fact that globally diversified portfolios don’t protect investors from short systematic crashes miss the greater point that investors whose planning horizon is long term (and it should be, or they shouldn’t be invested in stocks to begin with) should care more about long, drawn-out bear markets, which can be significantly more damaging to their wealth.

In their study of 22 DM countries during the period 1950 through 2008, the authors examined the benefit of diversification over long-term holding periods. They found, over the long run, markets don’t exhibit the same tendency to suffer or crash together. As a result, investors should not allow short-term failures to blind them to long-term benefits.

To demonstrate this point, the authors broke down returns into two components: (1) those due to multiple expansions (or contractions); and (2) those due to economic performance.

They explained that these results “are consistent with the idea that a sharp decrease in investors’ risk appetite (i.e., a panic) can explain markets crashing at the same time. However, these risk aversion shocks seem to be a short-lived phenomenon. Over the long run, economic performance drives returns.”

We live in a world where there are no accurate crystal balls. Thus, the prudent strategy is to build a globally diversified portfolio. And that includes a significant allocation to EM, with its global market cap weighting (about one-eighth of total equities) being a good starting point.

Unfortunately, that’s just the necessary condition for success. The sufficient condition for success is to possess the discipline to stay the course, ignoring not only the clarion cries from those who think their crystal balls are reliable, but also the cries from your own stomach to GET ME OUT! As Warren Buffett explained, “The most important quality for an investor is temperament, not intellect.”

To help you stay disciplined and avoid the consequences of the dreaded investment disease known as recency, I offer the following suggestion. Whenever you are tempted to abandon your well-thought-out investment plan because of poor recent performance, ask yourself this question: Having originally purchased and owned this asset when valuations were higher and expected returns were lower, does it make sense to now sell the same asset when valuations are currently much lower and expected returns are now much higher?

The answer should be obvious. And if that’s not sufficient, remember Buffett’s advice to never engage in market timing, but if you cannot resist the temptation, then buy when others panic and sell when others are greedy.