Global equity strategies are most often executed through actively managed funds that select stocks from multiple countries. One of the arguments for using actively managed funds in international markets is the perception by many investors that international equity markets are less efficient than the U.S. market, and, therefore, a potential source of abnormal returns.

David Gallagher, Graham Harman, Camille Schmidt and Geoff Warren, authors of the October 2016 paper “Global Equity Fund Performance Evaluation with Equity and Currency Style Factors,” contribute to the literature on the performance of actively managed funds. They used a holdings-based analysis to estimate the style factor exposures of 90 institutional global equity funds. This allowed them to isolate these funds’ sources of risk-adjusted returns.

The use of institutional funds is an important contribution. Specifically, as the authors noted, “institutional mandates can benefit from closer monitoring by informed investors/clients, and can be less exposed to any agency problems arising within fund families. Further, because institutional mandates are often managed as segregated accounts, they are not subject to the costs associated with providing immediate liquidity that arise within pooled, open-ended funds. These costs have been shown to reduce fund returns by around 1% p.a. or more.”

Their model included six well-documented equity factors: the market factor, value, size, momentum (MOM), investment-to-assets (I/A), return-on-equity (ROE) and illiquidity (ILLIQ). A key contribution of their study is the incorporation of currency factors into the model: trend, carry (reflecting strategies that aim to exploit the interest rate differential between countries, in which an investor borrows from, or shorts, countries with low interest rates and invests in, or goes long, countries with high interest rates) and purchasing power parity (PPP) deviation (a value-type factor).

Following is a summary of their findings, which cover the period 2002 through 2012:

Gallagher, Harman, Schmidt and Warren concluded: “Overall, we detect no evidence that the average global equity fund manager possesses any skill in stock or currency selection.” However, they added: “The average global fund in our sample has managed to extract a positive return contribution from emerging markets, while they have not been able to do so in developed markets.”

Because their study examined only equity holdings, and thus didn’t include the impact of any cash holdings (in a rising market, cash acts as a drag), I emailed the authors to ask about this issue. They explained that there was only a 0.01% difference, on average, between reported total returns and their constructed returns.

They also explained that a reason to expect that cash may not be a large drag in their sample is that the investments are institutional mandates and not pooled vehicles. Hence, they don’t need to hold cash to meet redemptions. It is more likely that the institutional investors in these funds request that cash be kept to a minimum to avoid the cash drag.

These results certainly aren’t encouraging for investors who believe active management is the approach most likely to deliver superior outcomes in international markets. However, the authors’ results are consistent with those of a recent study on the performance of global equity funds, though not the case in emerging markets.

In October 2016, the Financial Times reported that a study by S&P Dow Jones found “only two in every 100 global equity funds have outperformed the S&P Global 1200 since 2006. Almost 97 per cent of emerging market funds have underperformed.” The bad news for investors is that while assets held in passive mutual funds have grown 230% globally, to $6 trillion since 2007, assets held in active funds total $24 trillion.

Also thanks to S&P Dow Jones, we have further evidence on the failure of actively managed international funds to outperform. Keep in mind that, in this case, we are looking at retail, not institutional, funds.

Of course, these are the funds that individual investors can purchase. The year-end 2015 SPIVA scorecard showed the following damning results for the latest 10-year period. The results are based on euro-denominated returns.

Overall, the evidence demonstrates how difficult it is for actively managed mutual funds to outperform over longer time frames. The evidence is especially damning when it comes to the supposedly inefficient asset class of emerging markets, where just 3% of actively managed funds beat their benchmark, and where the underperformance was 2.9 percentage points on an equal-weighted basis and 1.8 percentage points on an asset-weighted basis.

I will offer one additional bit of evidence on the failure of actively managed funds to deliver on their promise of outperformance. The following table shows the 15-year Morningstar rankings of international structured (passively managed) funds from Dimensional Fund Advisors (DFA) as of Oct. 25, 2016. (Full disclosure: My firm, Buckingham, recommends DFA funds in constructing client portfolios.)

Again, these performance rankings are relative to publicly available mutual funds. As you review the results, keep in mind that Morningstar data contains considerable survivorship bias, as the rankings only include funds that have survived the full period. And each year, about 7% of all funds are sent to the mutual fund graveyard due to poor performance. 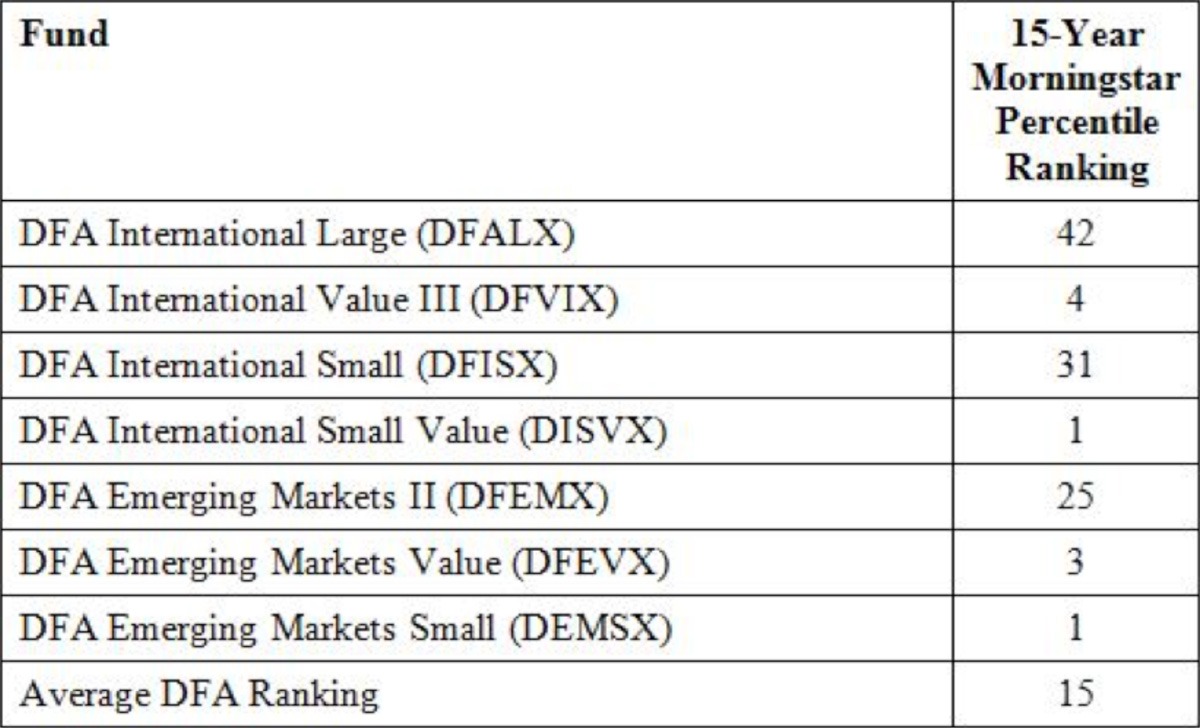 The table shows that, on average, the seven DFA funds for which rankings were available outperformed 85% of the surviving actively managed funds, even before taxes. Even more “impressive” is that, in the supposedly most inefficient asset class of emerging markets, the three DFA emerging market funds outperformed 90% of surviving actively managed funds.

It’s important to remember, though, that often the largest expense for many actively managed funds is taxes, not their expense ratio. Thus, the results would likely have been even more damning on an after-tax basis.

In our book, “The Incredible Shrinking Alpha,” my co-author, Andy Berkin, and I show there has been a persistent trend in that, while achieving alpha has long been a loser’s game (one that’s possible to win, but with odds so poor that it’s not prudent to try), it’s becoming more and more difficult each year as the market becomes more efficient over time and the competition in it gets increasingly tough. The results of the studies discussed here are just further support for the evidence presented in our book.

If you are still playing that loser’s game, and have not been rewarded for your faith, it’s time to throw in the towel and join the passive revolution. As Warren Buffett has said, if you do so, you’re virtually assured to outperform the vast majority of investors, both individual and institutional.

The opinions expressed by featured authors are their own and may not accurately reflect those of Beacon Hill Private Wealth or the BAM ALLIANCE. This article is for general information only and is not intended to serve as specific financial, accounting or tax advice.